Noir City: ACT OF VIOLENCE and NIGHT HAS A THOUSAND EYES

This is it, Noir Hounds. The capper of the 20th (!!!) annual Noir City Hollywood. It’s been a real pleasure to be your plucky girl reporter for all these years and I hope that you’ve all been enjoying the play-by-play.

But before we finish up another year, an important reminder. If you love these films as much as I do and want both the festival and my write-ups to continue for another 20 years, put your money where your mouth is and donate to the Film Noir Foundation so they can keep on restoring, preserving and projecting our Film Noir heritage. You can even score some cool swag for your simoleons. Not to mention the always excellent Noir City Magazine, featuring a rouge’s gallery of crackerjack writers. Also, me.

First up, one of my all time favorites, ACT OF VIOLENCE. 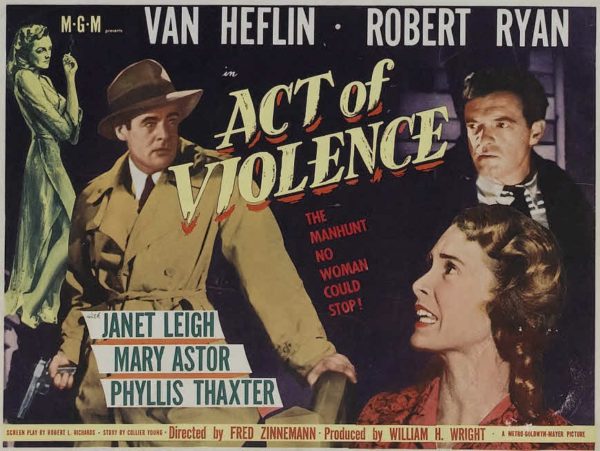 I’ve seen this one a zillion times, but never get tired of it. Especially not when I get to see it on the big screen. Check out my previous write up from way back in 2007.

But seriously, I can’t say enough good things about this flick. It deals with PTSD and the horrors of war in a brutally honest, morally complex and gray-shaded fashion that never lets anybody off the hook. It’s dark as fuck, but still leaves room for a tiny scrap of redemption at the end.

Ryan and Heflin are both superb, but Mary Astor steals the show as the middle-aged, world-weary hooker who only cares about kicks. 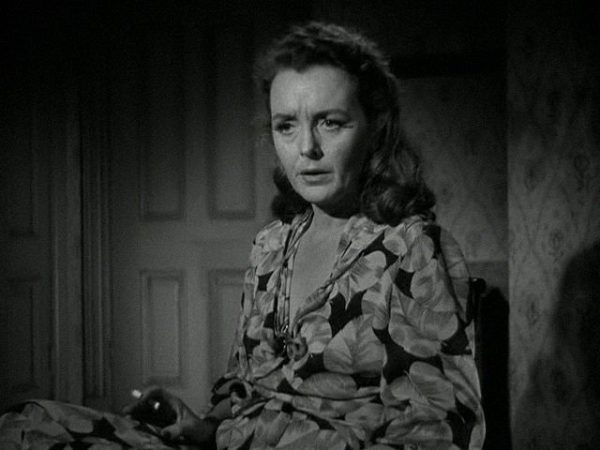 I was never much of a fan of hers, and actively disliked her in MALTESE FALCON. She always struck me as kind of dowdy and passionless, even when she was ostensibly young and beautiful. But she crushes this role, fearlessly baring every flaw and wrinkle for the harsh eye of the camera.

If you only see one of the films I recommended this year, it should be this one.

Next and last, a truly odd choice for our final film. NIGHT HAS A THOUSAND EYES. 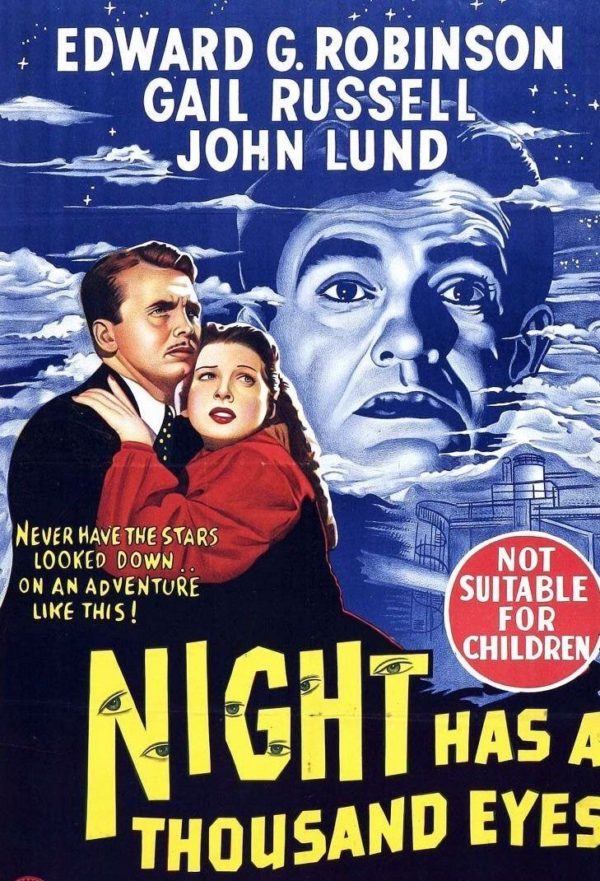 Before I say anything else about this film, you need to know that it featured the THIRD Noir Poodle in this year’s festival. Is this some kind of a hidden theme? Clearly I need to hire artist Lili Chin to create a companion design to her famous Noir Dog tee. The poodle would be female, a Canine Fatale.

A down-and-out mentalist (Edward G. Robinson) tortured by his morbid psychic visions saves a young woman (Gail Russell) from suicide. Turns out her parents were partners with the mentalist in his old act, before his dark powers drove them apart. Now he’s back to try to save the daughter from her predestined death and prove to himself that it is possible to change the path of destiny.

Yeah, I don’t know about this one. Ok, so it’s based on a novel by Cornell Woolrich, which gives it impeccable Noir credentials despite the supernatural angle. And who doesn’t love Eddie G? 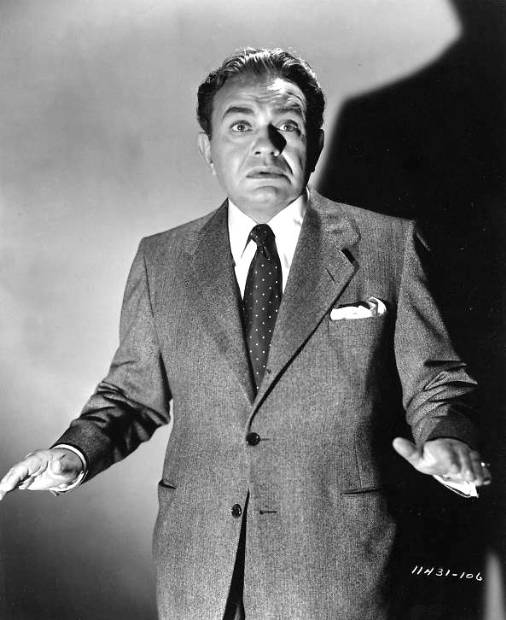 Plus, there’s more great vintage Bunker Hill footage. You could have a lot of fun if you took a drink every time we saw Angel’s Flight this year. Last night we got to see it twice.

But, although the supernatural angle starts off well, it turns hokey and cornball at the end. Robinson’s soul-crushing Cassandra complex makes for a bleak and certainly noir-esque jumping off point, but by the time we get to the final countdown to death in the mansion full of wise-cracking detectives, bumbling servants, and sinister, reaching hands, it really loses its bite. I also thought the who-dunnit reveal at the end came out of nowhere and kinda cheapened the whole thing.

This was a weird note to end on. According to host Eddie Muller, he had originally planned to end with KISS ME DEADLY so that we would go out with a literal bang. Unfortunately, the TCM festival is also showing KMD and asked for a little more time between the two screenings so we ended on a whimper instead. But hey, ACT OF VIOLENCE is fucking superb and I’m never sorry to see any noir flick (or even noir-adjacent like this one) on the big screen.

Well, that’s it, Faustketeers. Another Noir City Hollywood is in the can. Thanks for reading along and hope you’ll join me again next year, when Noir City will be old enough to drink.